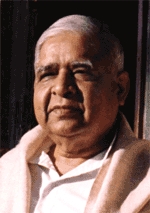 Satya Narayan Goenka was the foremost lay teacher of Vipassana meditation of our time.

Although Indian by descent, Mr. Goenka was born and raised in Myanmar (Burma). After receiving training for 14 years, Mr. Goenka settled in India and began teaching Vipassana in 1969. In a country still sharply divided by differences of caste and religion, the courses offered by Mr. Goenka soon attracted hundreds of thousands of people from all sections of society.

Over a period of almost 45 years, Mr. Goenka and the teachers appointed by him have been teaching hundreds of thousands of people in India and world over. Today, meditation centers established under his guidance are operating in almost all countries of the world.

The Buddha never taught a sectarian religion; he taught Dhamma – the way to liberation – which is universal. In the same tradition, Mr. Goenka’s approach is totally non-sectarian. For this reason, his teaching has had a profound appeal to people of all backgrounds, of every religion and no religion, and from every part of the world.

Mr. Goenka was the recipient of many awards and honors, including the prestigious Padma Shree award from the President of India in 2012. This is one of the highest civilian awards given by the Indian Government.

In 2000, Mr. Goenka, the principal teacher of Vipassana, spoke at the “Millennium World Peace Summit” at the United Nations World Headquarters in New York. 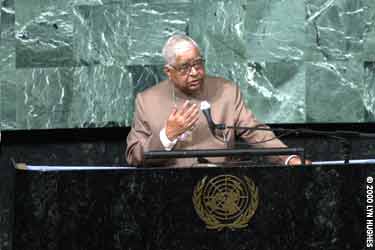 Mr. Goenka stressed in his speech, “There cannot be peace in the world when people have anger and hatred in their hearts. Only with love and compassion in the heart is world peace attainable. ” Mr. Goenka said, “When there is anger and hatred within, one becomes miserable irrespective of whether one is a Christian or a Hindu or a Muslim.”

Similarly he said to a thunderous applause, “One who has love and compassion with a pure heart experiences the Kingdom of Heaven within. This is the Law of Nature, or if one might rather say, God’s will.”

We should all give importance to this aspect of religion and avoid conflict over the outer shell of the religions, which is various rites, rituals, festivals and dogmas.